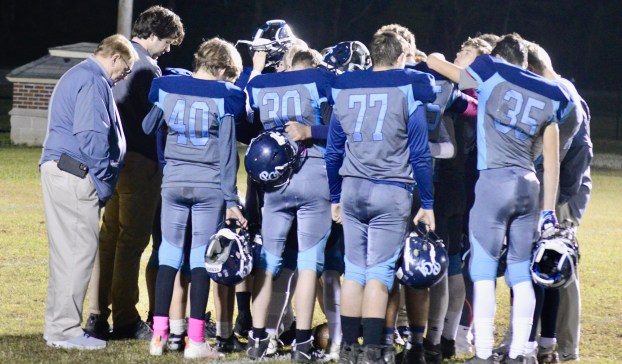 Pungo Christian Academy will have to wait another year to claim a state championship after a 36-22 loss to Bethel Christian of Kinston in the North Carolina Independent Schools Athletic Association Division II title game Friday night at Community Christian School in Wilson.

The Raiders (4-2) knocked off the Trojans, 46-22 at home in early October, but couldn’t pull it off in the title game.

Junior quarterback Tristan Mann put PCA on the scoreboard first with a 69 yard scoring dash down the left sideline on the Raiders first possession.

Bethel’s relentless ground attack led to three second quarter touchdowns for a 22-8 halftime lead as the Trojans rumbled for over 300 total rushing yards.

“We knew they were going to run the ball because that’s what they do, but we had a hard time getting stops when we needed them,” Pungo coach Stacey Keech said. “We came back a couple of times to make it close, but just couldn’t get there. It’s hard to take, but I love these guys to death and I’m very proud of them.”

Junior Fortino Beltran scored on a 24 yard run and a 52 yard pass from Mann to pull the Raiders to within 28-22 with 9:30 left, but that was as close as they came.

Pungo played football through the 1980’s, then reinstated the program five years ago, playing the first year as a JV program. Keech was an assistant that first year, then assumed the varsity head coaching role.

“We’ve come a long way in five years,” he said. “We only won once last year, and these kids dedicated themselves to starting early to get better. We’ve battled through the uncertainty of not having a season, having games cancelled because of COVID and to make it this far is a great accomplishment for the kids and our school. Hopefully, we’ll be the ones celebrating next year.”

Keech will have an experienced squad next year as seniors Ian Swindell and Dane Thomas are the only two Raiders who won’t return.