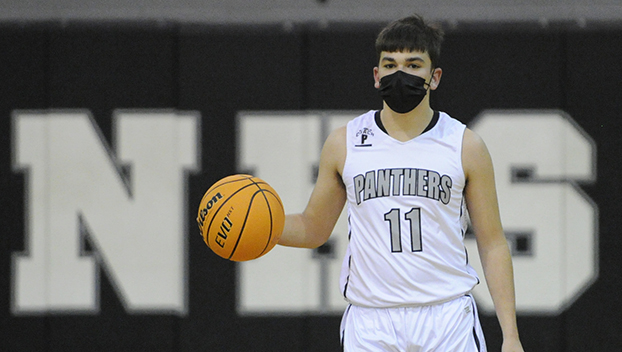 Two years removed from a string of three straight playoff appearances, the Northside boys basketball team is taking it one step at a time as their COVID-19 delayed season finally begins.

The Panthers are 0-2 after a 74-63 home loss to Southside in the opener and a 71-57 defeat at Jones Senior Friday night.

“We were with Southside until the fourth quarter when we got in foul trouble and couldn’t hit our free throws,” said third year head coach Jared Adams, whose team trailed by one point after three quarters. Our defense let us down Friday and we can trouble rebounding and closing them out down low. There’s plenty to work on, but both games have helped us improve.”

Adams is looking to replace the bulk of his scoring and rebounding from last year as seven juniors, four seniors, one sophomore and one freshman make up the roster. Caleb Alligood, Michael Brooks, Brandon Eborn and Sam Vansant are the seniors. Alligood is the most experienced after averaging five points in 21 games last year. Vansant split time between the varsity and JV, Eborn hurt his knee early last season and Brooks is playing organized basketball for the first time.

“We are junior-heavy, but we need everybody to be successful.” Adams said. The seniors have all improved from last year and they’ve been good leaders. I’m looking for Kiefer Boyd to help us out on offense and Hunter Braddy to help us down low. Alligood should lead us defensively and we’ll be a better team when we can get some things smoothed out on that end.”

Boyd has done his part offensively with 13 points against Southside and 20 versus Jones Senior. Sophomore Briley Cooper scored 15 points in each game, his first two contests since 8th grade because of knee injuries.

“We have plenty of potential, but it’s a matter of adding experience to go along with it,” Adams said.  “We’re doing a lot of skill development drills in practice, particularly on the defensive end with regard to proper alignment, movement and being in the right spot to close out underneath. We need to cut down on second chance points and get back to defend in transition. Doing those things will make our young guys get better quickly.”

Thanks to COVID-19, Northside is playing a conference-only 14 game schedule and masks are required during play.

“We are dealing with it like everyone else, but fatigue definitely sets in quicker,” Adams said. “The players have a hard time hearing my play calls because everything is muffled. We’re getting used to it, but it hasn’t been easy for anybody.”

Riverside and Pamlico County are traditionally the teams to beat in the Coastal Plains 1A conference and this year is no different. The Panthers get their first shot at Riverside Friday night in Williamston.

“We are the underdogs in the conference right now, but that’s okay,” Adams said. “We’ll continue to work hard in practice on our ball movement and rebounding. Our tempo has been good, and we’ve played well as a team. We’ll keep developing and it will pay off for us in the long run.”