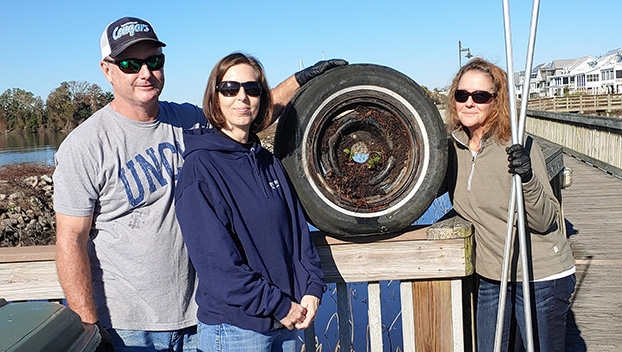 It took all three of these volunteers to haul that tire out of the wetlands – because they had to do it from the docks. Pictured here (from left to right) are John “Coach” Woolard with his wife Hope Woolard, who is Water Resources Superintendent for the town’s Water Resources Department, and Anita Woolard, who is John’s sister and, for this event, chose not to wear the scrubs people are accustomed to seeing when she is treating patients at Vidant Family Practice. (KAREN THIEL)

Adopt-A-Wetland, a work of the heart

A small but dedicated army of volunteers gave an early Christmas gift to local river life recently, when they spent the better part of a beautiful eastern North Carolina morning picking trash out of a section of wetlands near the Estuarium.

“The trash bag is getting heavy and that’s a good sign,” said Mike Apple, who has been Washington’s environmental health and protection officer for the last three years, and an employee of the Water Resources department for almost 25 years. Apple and five others picked everything from liquor bottles to tires out of the water that day. He said the five people involved in that cleanup effort retrieved approximately 80 pounds of trash and contaminants from the wetlands below the popular boardwalk just past Main Street.

“This is better than going to the gym,”  said one of the volunteers who, when asked for her name, politely declined. “I’m just a person who’s doing her part,” she said quietly, then aimed her grabber at another item that didn’t belong in the water, close to where a family of turtles were sunning themselves on a log.

Apple said the next opportunity for people to protect Washington’s wetlands in this manner will probably be scheduled for some time in February, when the is a bit warmer and peoples’ weekend schedules are less crowded. “It’s really hard to get people out around the holidays. We’re trying to see what works for timing,” he said.

Anyone interested in volunteering for the next wetlands clean-up may contact Apple at the Department of Public Works by dialing 252-975-9310.

Stars and Stripes retired with reverence

Visitors to Goose Creek State Park on November 7, 2020 didn’t seem to notice the campfire surrounded by more than... read more