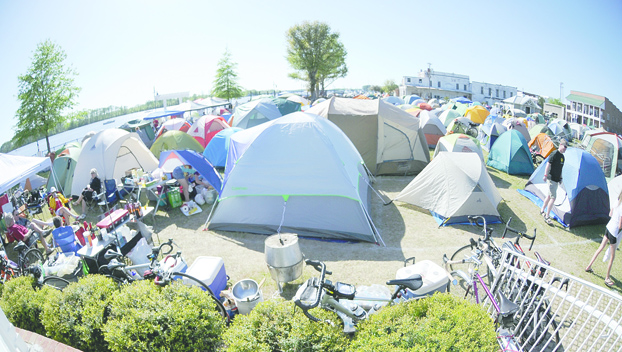 The COVID-19 pandemic won’t prevent the 19th annual Cycle N.C. Coastal Ride from returning to Washington on April 23-25, but several changes have been made to help prevent the spread of the coronavirus.

Washington is hosting the Coastal Ride for the sixth time. Cycling routes ranging from five miles to 100 miles will be offered throughout the three-day event. Riders will be able to camp out in Mac Hodges Festival Park. Past Coastal Ride events brought an influx of customers to Washington’s hotels, Airbnbs and other hospitality services.

City manager Jonathan Russell said Washington Director of Police and Fire Services Stacy Drakeford has agreed to allow waterfront camping again at this year’s event, as long as the state’s COVID-19 protocols are followed. Currently, no outdoor gatherings can be larger than 50 people.

At February’s Washington City Council meeting, Councilwoman Betsy Kane reported that North Carolina Amateur Sports, the nonprofit that operates the event, had made several changes in order to remain in line with state mandates, which could change between now and April.

“They’ve made some adjustments as far as not having entertainment or alcohol service, in order not to have close social congregating and lowering of inhibitions and that kind of thing that might lead to virus risks,” Kane said.

“We will certainly know more about what rules apply as we move into April,” Kane added.

All riders are required to pay a registration fee, which varies based on age. According to the event website, there will be no refunds allowed unless the event is canceled because of COVID-19.

The Coastal Ride routes include rest stops where riders can refuel with food and beverages, as well as mechanic stations where bikes can be repaired.  The routes cover locations such as Goose Creek State Park, Acre Station Meat Farm, Belhaven and the Aurora Fossil Museum.

UPDATE: Kalila Cherry has been located and is safe. The Beaufort County Sheriff’s is asking for the public’s help in... read more