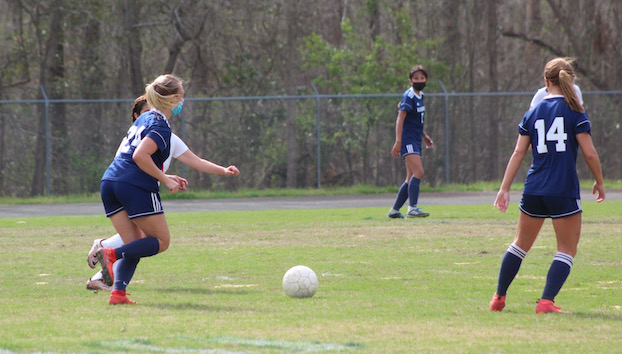 The area high schools completed another successful week on the pitch, diamond and links before starting spring break next week.

The Pam Pack girls won their 57th straight conference match, 10-0 vs. West Craven Wednesday at home. The streak dates back to the 2013 season when the team competed at the 3A level. Washington is 3-1 so far this season with 10-1, 10-1 and 10-0 league victories and a 7-1 defeat to D.H. Conley. Sophomore Taylor Mitchell scored five goals Wednesday to run her team-leading total to 17. Senior Lilly Frances Lobos tallied twice, giving her seven on the year, while Arissa Kim, Stella Frisbie and Jasmelly Lugo each scored once. Alaxa Davenport had the shutout in goal.

Washington won a pair of home games this week. Sophomore Erin Everett pitched four shutout innings in relief of starter Savanna Craft to earn the save in Tuesday’s 5-4 win over South Lenoir. Laci Campbell led the offense with two hits, including a double and two runs scored.

Katherine Pollock went 4-4 with a pair of home runs, a double and four RBI in a 16-6 rout of West Craven. Ava Shae Mizelle had two hits and scored three times, while Morgan Eisenzimmer had a double, drew three walks and scored three runs as the Pack raised its record to a conference-leading 5-0 and 5-1 overall.

Northside is off to a 3-0 start after a 7-6 win at Bear Grass. Senior Kathleen Slade went 3-3 and scored three times to raise her team-leading average to .625 with seven runs scored. Sophomore Hannah Black belted her second home run against the Lady Bears and she’s driven in a team-best 10 runs.

While the public school season doesn’t start until April 26, the Pungo Christian Academy Raiders are 5-4 overall and 3-2 in conference play. Junior Devin Cradle recently pitched 14 straight innings without allowing an earned run. Cradle is among the Raiders batting leaders with a .400 average, 10 hits including three doubles, two triples and a home run and 11 stolen bases. Freshman Drew Van

Staalduinen has a team-best .421 average with 7 RBI. Freshman Bo Spencer is next at .409, while junior Dylan Simmons is batting .400 with a team-high nine RBI.

The P.S. Jones Middle School baseball team is 2-0 after a 10-8 come from behind victory over Greene County Middle School. The Demons trailed 6-1 early, but Gabe Davis’ two-run double ended game in the bottom of the fifth as P.S. Jones rallied for six runs in the inning. Davis was 3-4 with three RBI and scored twice. Matthew Jefferson hit a two-run homer and Trenton Baldree went 2-2 with 3 RBI.

Southside won its second straight match by a comfortable margin at The Links in Nags Head over Manteo and Mattamuskeet. Luke Matthews took medalist honors with a nine hole score of 44. Dylan Wilkins shot 49, Caleb Dixon had a 51 and Harrison Phelps carded a 57 to complete the Seahawks scoring.

Northside fell to Riverside in its only match this week. Caleb Alligood led the Panthers with an 87 for 18 holes.

The Pungo Christian boys are ranked first in the NCISAA 1A golf poll after a strong start. Senior Caeden Lyons is the second-ranked individual, while sophomore Sam Warren Is 10th. Lyons (40) and Warren (42) led the Raiders in their latest win over Northeast Academy and Ridgecroft.

Snow Hill-Washington High School’s potent offense came to life with some help from the defense in the third quarter to... read more