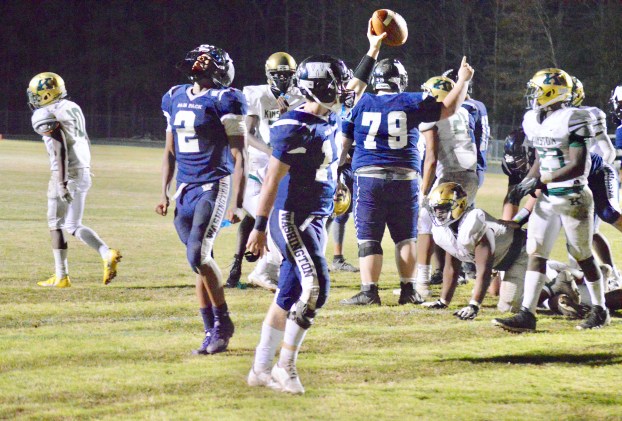 Junior quarterback Hayes Pippen celebrates in the endzone after putting the Pam Pack ahead in overtime. (Steve Barnes |Daily News)

Wild doesn’t come close to describing what happened at Wagner Stadium Thursday night. Neither does heart-stopping, unbelievable, or crazy, although all are accurate in Washington’s come from behind 50-49 overtime victory over Kinston.

All involved knew the Eastern Carolina 2A Conference title was on the line, but nobody knew a Pam Pack defeat would also keep them out of the playoffs despite a 4-1 league record.

With a win Friday at lowly Greene Central, West Craven would also be 4-1. Since the teams didn’t play during the season because of COVID-19 scheduling conflicts, a coin flip was held Thursday and the Eagles guessed correctly, which would have given them the second state playoff bid from the conference behind the Kinston-Washington winner.

The Pack (5-1, 5-0) made it all a moot point without knowing the backstory with a miraculous second half comeback to wipe out a 35-14 Kinston lead late in the first half.

The Vikings (5-1, 5-1) entered the contest without giving up a point all season, but the offense set the tone early with touchdowns on their first four possessions for a 27-14 lead after Terry Moore and Jaden Hambric scored for WHS.

Momentum swung Washington’s way when Moore scored again just before halftime to make it 35-20 at the break.

“We just never gave up,” senior linebacker Walt Gerard said. “Hayes (quarterback Pippin) and I told the guys we had worked too hard all summer to just give up. There was no way we were going to quit and now we are conference champs.”

Moore reeled off a 48-yard touchdown run midway through the third quarter, then the defense held the Vikings on a fourth and two from their own 25, giving the offense the chance to take the lead.

Two plays later, Pippin found Hayden Anderson for a scoring pass and Gerard added the two point conversion for a 36-35 lead with 30 seconds left in the third quarter.

Kinston scored its first touchdown since early in the second quarter after a long march to make it 43-36 with 2:35 left in the game.

Moore rambled 38 yards to the Viking 25 with 1:11 left and with the crowd in a frenzy, the final sequence was almost too tense to watch.

Hambric gained nine yards to the 16 with 41 seconds left. Pippin lost three on a sack, but Moore burst for 13 yards down to the six, where the Pack called its final timeout with 20 seconds to go. Pippin found paydirt on a right-side run with 14 seconds left to make it 43-42.

The call was for a two point conversion to win, but WHS had too many men on the field, so Ridge Zerniak booted the season-extending extra point to force overtime.

The Pam Pack took the ball at the Kinston five yard line after a Vikings penalty. Hambric fought his way to the one, then Pippen plunged in for a 50-43 lead.

Kinston answered with a third-down touchdown and the season came down to the final two point try.

With the quarterback in the shotgun formation, the snap sailed over his head and pandemonium broke out as the celebration began.

“I’m so proud of my guys for never quitting,” said coach Perry Owens, who was overcome with emotion. “Nobody picked us to win this game, but we are conference champs for the second straight year. We beat ourselves in the first half but snapped out of it just in time. There were so many kids who made big plays for us.”

Secure in knowing their season will continue, the Pack awaits the playoff seeding announcement that will come this weekend after a true instant classic victory.