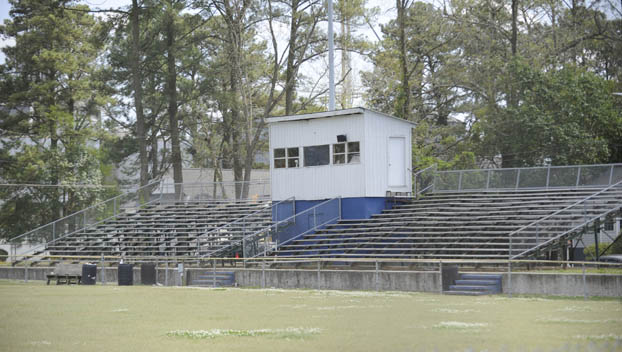 What does Kugler Field’s future hold?

The former home of Pam Pack athletics is located just off of Hudnell Avenue in Washington. Beaufort County Schools owns the field by way of a memorandum of understanding with the City of Washington. The facility includes a baseball diamond as well as a field that can be used for football or soccer.

Kugler Field has fallen into disrepair with age. Condemned bleachers and issues with the restrooms are two glaring issues.

“That’s largely why we tell other entities that we wish not to actually utilize that complex,” Superintendent Matthew Cheeseman said. “We do have private schools sometimes that ask us to use it, especially during the pandemic when their fields couldn’t be used for weather.”
The Washington Youth Football League uses and maintains the facility six months a year. The school system oversees the facility outside of that time frame. Washington High’s soccer and baseball teams occasionally hold practices at Kugler Field as needed.

During a Beaufort County Schools Board of Education meeting on Tuesday, Vice Chairman Michael Bilbro said he wants the district to do something to preserve the facility.

Chairwoman Carolyn Walker said outfitting Washington High’s new soccer facility that is under construction should take priority, and improvements at Kugler Field should be addressed once that project is complete.

“Long-term, that is a great space for the youth, and that’s why the Kuglers left it the way they did — they wanted it to always be used by the youth.”

Assistant Superintendent Mark Doane said the bathrooms at Kugler Field are up to code, but they need repairs and renovations.

“It’s not something I’d want a visiting team or even our own kids using unless we absolutely have to,” Doane said.

The condemned bleachers pose an obvious legal risk. Doane said replacing those would be a good first step in renovating the facility.

Board member Terry Williams suggested that the district start researching how much it would cost to remove the current bleachers. Getting rid of the bleachers would ease liability concerns while also opening the door to install a new set, which wouldn’t need to be as large as the current structure, Williams noted.