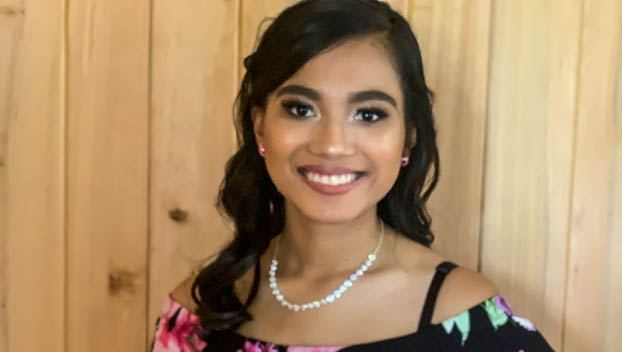 This past academic year has been a rough ride for many students attending Beaufort County Community College. They adjusted to new video and online classes, but some students had additional hurdles outside of class. Fatima Garcia, a senior at Northside High School refused to withdraw from college classes so that she can stay on track, even as her family endured COVID-19 and a car wreck, and she had an appendectomy with complications. Garcia will graduate this spring with her high school diploma from Northside High School and a criminal justice technology diploma from Beaufort County Community College, the first Latina student to do so.

Garcia has already been accepted at Belmont Abbey College located west of Charlotte, where she will attend this fall. Building off her criminal justice technology diploma, she plans to major in criminal justice to become a detective. Inspired by friends to join the field, she will be the first in her family in law enforcement, as well as the first one to graduate high school and go to college.

“The part that really interests me is the science of it: finding DNA or any kind of evidence, investing crime scenes, sending stuff off to the lab,” Garcia says.

“I wanted to start on my career as early as I could. I wanted to learn more about the field, about the criminal justice system as a whole,” she says about participating in Career and College Promise, the free dual-enrollment program that allowed her to take college classes while still in high school. “Beaufort has helped me grow a lot. It’s helped me to be more responsible with my work, turning it in on time. It’s helped me to grow as a person. In high school they still hold your hand a little, but at Beaufort they don’t. It’s either you do the assignment or not.”

One of the professors who helped her to mature was Crystal Watts, lead professor for criminal justice technology. “She’s a very good instructor. She’s very understanding,” Garcia says about Watts. “She has the patience to explain something to you. I’ve had a lot of ups and downs, you know. I’ve had surgery and other personal things in the way. She’s been understanding in those situations.” Regardless of the circumstances, Garcia knew that if she wanted to complete the classes by graduation, she could not withdraw from a class.

Her public speaking professor Ben Deck was another understanding-but-firm instructor, “which is a good thing because I don’t like to procrastinate. They both helped to be responsible,” she says.

In July 2020, Garcia and both of her parents were hospitalized with COVID-19. Her breathing was heavily affected, and she was on medication while in and out of the hospital, forcing her to drop her psychology class. She would go on to repeat this class in the spring.

“I was in the hospital with her. I couldn’t get to my computer. It was a tough couple of days,” she reflects.

The experience helped her to think about the importance of her Spanish knowledge in her career in law enforcement. High stress and high stakes interactions such as court proceedings, police interactions and medical emergencies are complicated and become even more stressful when a language barrier exists.

Garcia would face yet another crisis when in February she went to the doctor complaining about sharp pains on her right side. By that night she was in surgery to have her inflamed appendix removed. Usually an outpatient procedure, Garcia’s breathing problems from COVID-19 now complicated her recovery.

“I had to be put on oxygen because I couldn’t breathe on my own. I was in there for a week. It took a while to get my oxygen levels where they needed to me,” Garcia said. Her oxygen level was at 70%, whereas a normal patient would be above 95%.

Even throughout her surgery and complicated recovery, she was focused on college.

“I was afraid to lose everything I had worked for in college. I just had that gut feeling.” She emailed all of her instructors the day after her surgery. There was a chance that she would need to withdraw from her classes due to her missing so much time in class.

With her assignments turned in well before her due dates, she is on track to graduate from both Northside and Beaufort, breaking new ground in her family.

Two local youth swimmers had a successful day in the pool as East Carolina Aquatics hosted the Waves of Wilmington... read more