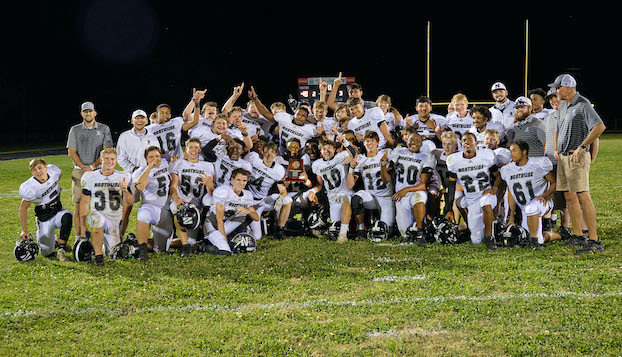 Northside heads to Carter-Finley Stadium in Raleigh to face Murphy for the Class 1A football state championship Saturday at noon. (Andre Alfred/ for the Daily News)

The Northside Panthers should have been downcast after their 50-48 overtime loss at Pamlico County a month ago.

After all, they had several chances to win, but turnovers and penalties got in the way. As it turned out, those missed chances set the tone for the season’s final stretch and might be the reason the Panthers are among the few teams still playing in North Carolina.

“We just sort of looked at each other walking off the field and said we were just as good as they were,” senior receiver Tyler Modlin said. “We thought Pamlico was one of the better teams in the East and we felt like we could beat them if we got another shot.”

That shot came two weeks ago in the second round of the playoffs, this time at home in Bing Mitchell Stadium.

Northside (8-2) extracted revenge, 43-32, then rolled over Northampton for the East title, 46-6, and face 9-1 Murphy for the 1A state title Saturday at noon in Carter-Finley Stadium in Raleigh.

“We knew we could beat Pamlico, especially at home,” senior lineman Fred Taylor said. “We know Murphy is good, but so was Pamlico and now we have the confidence to play with anybody. This is a once in a lifetime experience and we are planning on making the most of it.”

Good might be an understatement when it comes to the Bulldogs. Veteran head coach David Gentry is going for his ninth state championship. The first two were back-to-back 15-0 seasons in 1986 and ’87. They played for the championship four years in a row, winning in 2011 and ’13, while losing in ’10 and ’12. The Bulldogs have won their last three attempts in 2013, ’16 and ’18 and avenged their only loss this season against conference rival and defending state champion Robbinsville, 24-14, last week in the West final.

Meanwhile, the Panthers are making their second trip to the final, losing 31-6 to Graham in 2000.

“They definitely know what to expect in this setting, while we are trying to manage our excitement and focus on the game,” Northside coach Keith Boyd said. “We want our guys to soak it all in and enjoy it, but at the same time concentrate on playing our game and stopping a very good opponent.”

Both teams are ground-oriented, the Panthers probably more so. Senior James Gorham leads the offense with 1,473 yards and 23 touchdowns, while averaging 12 yards a carry. He ran for 248 yards and three TD’s last week at Northampton. Northside averages 316 yards rushing per game and 50 passing, while Murphy averages 257 rushing and 98 passing yards per contest. Four Bulldog running backs have over 200 yards for the season.

“This is what we worked for all summer and our entire careers here,” Gorham said. “It’s going to be so cool to walk out into a college stadium for our last high school game. We can’t wait to play.”

It will take a while for the sting of Friday’s 34-23 home loss to St. Pauls to subside, but once... read more