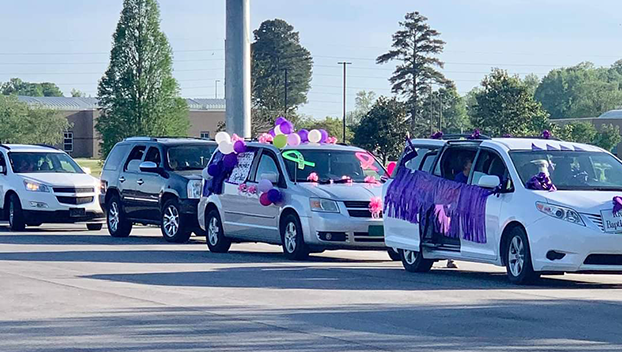 NIGHT FOR HOPE: The annual event featured a car parade instead of the usual walk for survivors and their families. During the parade, Sheriff Ernie Coleman escorted the survivors around the campus of Beaufort County Community College while decorations on each vehicle celebrated the individual survivors’ journeys. (Photo submitted by Carol West)

Over $53,000 was raised Friday during the annual Beaufort County Relay for Life event.

“As of event night we had raised $53,030.46. Our goal was $30,000, so you can imagine how excited we have been to exceed our goal,” said Carol West, one of the co-chairs for the event. “We had 17 registered teams and recognized the top three fundraising teams. First place went to Nutrien with $22,026, second place went to Christ Crusaders for a Cure with $6,760.40 and third place went to Riverside Baptist Church with $4,050.”

The event, which is held annually nationwide in conjunction with the American Cancer Society to raise awareness and funds for cancer research, was held on the campus of Beaufort County Community College. Attendees were made to stay in their vehicles throughout the event to follow social distancing protocols in place to prevent the spread of COVID-19.

This year’s event featured a modified version of the survivor parade, with cancer survivors driving around the campus in decorated cars escorted by Sheriff Ernie Coleman. Chocowinity Primary was honored with the Best Team Spirit award because of their car decorations, which featured messages to cancer survivors from children at the school.

“Many of the survivors decorated their cars with the number of years of survivorship and types of cancers they had,” West said. “Winners of the best decorated cars were chosen by the attendees of the events who voted with car horns and headlight flashing. First place was awarded to survivor Nicole DaVia, other survivors recognized were Debbie Harris, Iris Lilley, Pam Warren, Loretta Bailey, Lori Blackburn and Carey Woolard.”

Local cancer survivors Mindy Davis, Pam Warren, Wendy Jones, Betty Slade and Loretta Bailey shared their experiences from diagnosis to treatment during the event. Those involved in treatment and support for patients with cancer also shared inspirational words during the event.

“The Luminary Ceremony was beautiful with over 300 luminary bags and torches lit for the night. Each bag and torch had the name of someone touched by cancer or lost to cancer. Local bagpiper,  Randy Tyson, played Amazing Grace. Thankfully, the wind we had battled all day finally abated in time for the event, especially, for the luminary portion,” West said. “It truly was a night filled with hope. Hope that a cure will be found in our lifetime. That there is hope shown every day through our survivors who show that cancer is defeated daily, hope that one day no one will hear the words ‘you have cancer.’  That’s why we continue to fight.”

The ribbon-cutting ceremony for P.S. Jones Memorial Park on Saturday was everything city officials hoped it would be. The weather... read more