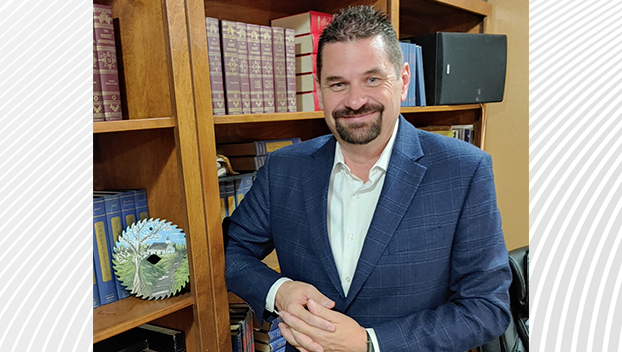 SERIOUSLY SENTIMENTAL: Pastor Kyle Miller took a moment away from organizing his office at Washington Assembly of God where, along with the scholarly book collection, he made sure to include a treasured piece of saw blade art that once belonged to his grandmother. (Karen Thiel / For the Daily News)

During an early-morning devotional, Pastor Kyle Miller recently told his online viewers that one of the most important things in God’s economy is faith, “no matter what’s going on. We’re not always going to know what God is up to, where we’re going or how we’re going to get there. Don’t worry if he doesn’t give you all the answers. God will always do what’s best for you and I.”

That lesson might have been written about the last three months of Miller’s transition from Texas to North Carolina in what probably felt like the blink of a divine eye. Miller has been senior pastor of Washington Assembly of God since May, after experiencing a brief but invigorating interview and vetting process that Miller said only God could have pulled together.

“Eighteen months ago, I knew God was preparing me and my family for a transition, but it was not my plan to come to Washington. It was God’s plan,” Miller said. That began with a phone call from Assembly of God Assistant Superintendent David Crabtree, who told Miller the leadership of a North Carolina church wanted to meet him. “It took less than a week, and was one of those things that only God does. We just stood back and watched things unfold,” he said of the experience.

Washington Assembly of God has been without a spiritual father for several months. It will be the fifth church Miller has served in the 25 years he’s been a pastor, a calling he never expected. Miller was an architecture and drafting major at college when he met a student named Stephanie – now his wife – whose family includes generations of Assemblies of God pastors. Love, marriage and three children followed, as well as advanced degrees in pastoral studies, bible and theology, and a pending doctorate in biblical exposition. Miller said the Holy Spirit uses all of that, in concert with a desire and joy that has been burning in him “ever since the moment I became baptized in the Holy Spirit, to help others find the freedom and power in a Spirit-filled life.”

He added that negative reactions from relatives holding a “very conservative religious background with little spiritual direction” helped him develop a pastor’s heart. “My beliefs and lifestyle changes haven’t been welcome by everybody in my family,” he said, adding that the effects of those reactions enable him to empathize with Jesus-believers facing rejection and hardship because of their spiritual decisions.

Miller has already resumed midweek bible studies. A 12-month Genesis-to-Revelation bible reading group begins in August, as well as small group studies on Sunday mornings so parents can be enriched while their children enjoy their own classes. Sunday night services will return in the fall.

“He is a seasoned pastor with a lot of wisdom,” said Patricia Daniels, a 19-year church member, leader and children’s pastor. “He is open and we like that honesty. He isn’t somebody who acts better than everyone else. We can relate to him.”