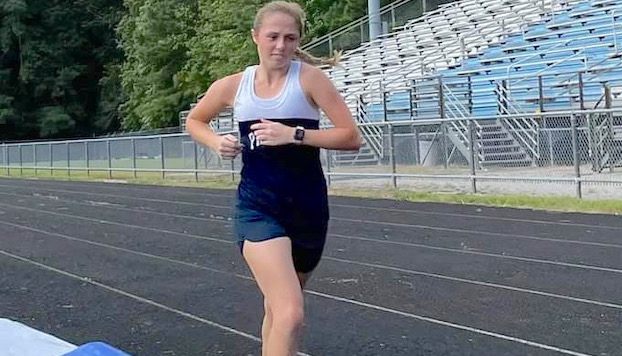 Knowing where Olivia Paszt is after 3:30 p.m. on weekdays isn’t that hard. However, to find her, one must know what day it is and what sport is in season.

It’s a bit trickier to track her down right now as Paszt (pronounced like pasta without the a) divides her time between two fall sports, cross country and tennis.

Basketball follows, then softball will wrap up her high school career, making her a four sport athlete, a rarity these days.

“I think it’s great and I wish more kids would play even three sports,” said Pam Pack softball coach Brad Horton. “I’ve known Olivia for a long time and she’s incredibly organized, is extremely coachable and a fun person to be around. She is mature enough to stay focused on whatever sport she’s playing and will be one of my leaders in the spring. Last year, she played second base, in the outfield and even pitched for us a couple of times. She’s fast and did a great job getting on base.”

Paszt followed her sister Grace, older by two years, onto the softball diamond when she was five. Their father, E.J., coached and wanted both girls on the same team, which meant Olivia always faced older competition.

“I’ve been playing softball since I can remember, so it’s probably my main sport,” she said. “I like the others also because they help me stay busy and spend time with my friends outside of class.”

The Washington native started running cross country and playing basketball in seventh grade at P.S. Jones Middle School, carried them over to WHS, then picked up tennis at the behest of close friend and teammate Mary Emma Holscher, who graduated in the spring after COVID-19 shuffled various schedules so she could play the same four sports as a senior.

“Softball ended earlier last year, so I let her (Mary Emma) talk me into playing tennis.” Paszt said. “It turned out to be really fun and Katherine Pollock and I finished second in the regional in doubles.”

Girls tennis is normally a fall sport, which poses a potential conflict with cross country for most, but Paszt has worked it out with the okay from both coaches.

“I told her to go for it and we’d figure it out,” Cross country coach Dawn Landen said. “Olivia is one of the hardest workers I’ve ever been around and I know she is the happiest runner I’ve ever coached. She has been there for at least part of every practice and meet and her organizational skills and positive personality sets a great example for our younger girls.”

Paszt carries a 4.64 grade point average and has taken early college classes at Beaufort County Community College since her junior year. She knows she’ll be on a college campus next fall, she’s just not sure where.

“My dad went to (North Carolina) State and my sister is there now,” Paszt said. “My mom went to Carolina, so it will be one or the other. I’d like to do something in the medical field, but I don’t know what just yet.”

First things first. There’s tennis and cross-country state tournaments to reach, followed by another rebuilding basketball season and a return to the softball state playoffs.

“It’s kinda crazy that’s it’s my last year after playing for so long,” she said. “I’m going to do the best I can to soak it all in, not overstress it and just have fun.”

Northside is off to a 4-0 start as non-conference volleyball action continues for the county teams. Washington’s Alexis Davenport (L)... read more